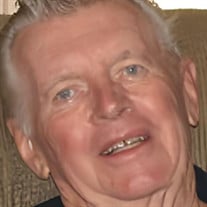 New Haven, Donald F. McCarthy Sr., 94, retired Deputy Chief New Haven Fire Department of Glen Haven Road passed away peacefully April 21st. He was born in New Haven, May 4th 1927, son to the late John J. McCarthy and Nellie Creighton McCarthy and was a lifelong New Haven resident. He was predeceased by former wife Lena Verbickas McCarthy, sisters, Virgina Avigne and Eleanor McCarthy, brother John J. McCarthy as well love of his life Betty-Lou Kiley. During WWII he served in the Pacific Theater in the U.S. Navy where he took part in the Okinawa and Philippine’s invasions and occupation of Japan. He joined the New Haven Fire Department in January 1951 and served 40 years advancing through the ranks retiring as Deputy Chief. During his career he was part of several unit citations and received a meritorious citation and Medal of Merit. He was past commander of the New Haven Fire Department American Legion Post 132 holding all positions within the post. In 1967 he was named Outstanding Legionnaire of the Year at the Connecticut State Convention of the American Legion. In 1982 he was appointed Chairman of the Department Americanism Committee and was awarded a Citation of Meritorious Service by the National Veterans Affairs & Rehabilitation Commission. In 1983 as American Legion Department Americanism Chairman and in cooperation with diverse patriotic societies he undertook a campaign to have Nathan Hale recognized as Connecticut State Hero which was signed into law June 6, 1985 by then Governor William O’Neill. In 2007 he was one of the first inductees into the Connecticut American Legion Hall of Fame. He was a member of the Knights of St. Patrick of New Haven where he instituted the Public Safety Night Annual Awards program and served on many committees. He marched in many St. Patrick’s Day parades with the New Haven Firefighters Post 132 Color Guard. He is survived by children, Donald F. McCarthy Jr. (Maggie) of Hamden, Eileen N. Zajic (Ron) of Derby, KS and Christopher Kiley (Margie)of Southwick, MA. He is survived by 5 grandchildren, Donald F. McCarthy III (Helen) of Wallingford, Dr. Matthew S. McCarthy (Nicole) of Shelton, Samantha K. Drotar of New Britian, Daniel P. McCarthy (Kasandra) of Meriden, and Joseph Kiley of Windsor. He is survived by one great grandchild, Riley K. McCarthy of Wallingford. Funeral from Sisk Brothers Funeral Home, 3105 Whitney Avenue, Hamden Friday April 29, 2021 at 9:30am. A Mass of Christian Burial at St. Therese Church, Middletown Ave, North Haven at 10:00am. Internment at All Saints Cemetery, North Haven. Friends may call Thursday from 4 to 8 p.m. Memorial contributions in lieu of flowers may be sent to New Haven Fire Department American Legion Post 132, 109 Sanford St. Hamden, CT. 06514. To leave an online condolence please visit www.siskbrothers.com

The family of Donald F. McCarthy, Sr. created this Life Tributes page to make it easy to share your memories.