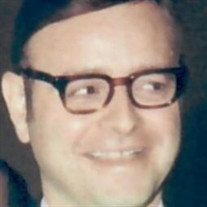 Donald Anthony Cascio of Hamden entered into eternal rest on November 7, 2021, after a short stay at Connecticut Hospice. He was the beloved husband of the late Maureen Shanahan Cascio. Donald was born on November 3, 1931, in Wallingford, CT. Son of the late Anthony Cascio and Jennie Manfredi Cascio, he is survived by his three children: son Stephen and his wife Margey, son Brian and his wife Johanna, daughter Regina and his four grandchildren: Justin, Lindsey, Jacob, and Kyler Cascio. He is also survived by his nephew Richard Cascio, Richard’s wife Patricia and his nephew Glenn Cibotti. In addition to his wife, he was predeceased by his brother Raymond Cascio, sister Marion Cibotti, and nephew Gerald Cascio. Donald graduated Lyman Hall High School in 1949 and later attended the University of Hartford. He also served in the U.S. Army. He was a salesman for Ulbrich Stainless Steel for over 30 years and received numerous awards throughout his career. After his retirement in 1996, he kept himself active through various activities including volunteering at Fort Nathan Hale and teaching computer classes for senior citizens at Hamden Public Library. He had a passion for history, in particular the Civil War, and was an active member of the Civil War Round Table, serving as vice president and treasurer at different times. His passion for travel took him on many trips within and outside the U.S., always trying to learn as much as he could while he was away. He was an avid sports fan of all New England teams including UCONN basketball. He enjoyed listening to jazz music and was a regular at jazz festivals throughout the years. His greatest achievement however was that of father. With the untimely death of his wife Maureen in 1986, he was left to raise three young children. Despite overwhelming challenges, he always put the needs of his children first. From coaching little league, to driving lessons, to providing for college, his children always had his unconditional love and support, as his entire family always had. We love you Dad. May you and Mom, together again, forever rest in peace. His children would like to thank Connecticut Hospice, the staff at Yale New-Haven-St. Raphael’s Campus, and offer a special thanks to Benchmark Senior Living of Hamden for their compassionate and respectful care in Dad’s time of need. In lieu of flowers, please make donations to the Alzheimer’s Association, Home Office, 225 N. Michigan Fl. 17, Chicago, IL 60601. A Mass of Christian Burial will be celebrated Friday morning at 11:00 in Our Lady of MT Carmel Church, Hamden. Burial will follow in All Saints Cemetery. Friends may call at Sisk Brothers Funeral Home, 3105 Whitney Ave., Hamden, Friday morning from 9:00-10:30. The Cascio family requests that masks be worn at the Funeral Home and Church. www.siskbrothers.com

Donald Anthony Cascio of Hamden entered into eternal rest on November 7, 2021, after a short stay at Connecticut Hospice. He was the beloved husband of the late Maureen Shanahan Cascio. Donald was born on November 3, 1931, in Wallingford, CT.... View Obituary & Service Information

The family of Donald A. Cascio created this Life Tributes page to make it easy to share your memories.

Donald Anthony Cascio of Hamden entered into eternal rest on...

Send flowers to the Cascio family.