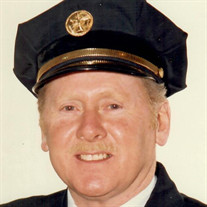 In New Haven, on February 4, 2021 Daniel Bernard Kirby, 94, Battalion Chief Ret. NHFD, a longtime resident of Fair Haven. Beloved husband of the late Emma Rose Barbato Kirby. Loving father of Rev. Mark Daniel Kirby, O.S.B., of Ireland, Daniel J. Kirby (Jill Lazusky) of North Carolina, Donna M. Cable (Wayne) of Woodbridge and Terence G. Kirby (Sandy) of New Hampshire. Also survived by his cherished grandchildren Sean (Nicole) Cable, Lauren (Brendan Rieger) Cable, Crystal (Joseph Maselli) Kirby, Kalyn (Robert) Whitney, Megan (Stephen) Lanno, Emily (Christian) Johnstone, Veronica, Michael, Mary and Jonah Kirby and great-grandchildren Baiden and Lochlan Cable, Maxfield Rieger, Magnolia and Ruby Whitney, and Kirby Louise Johnstone. He was eagerly awaiting the birth of baby Rieger in May. Predeceased by a son Michael D. Kirby, a grandson Jeremy Daniel Kirby and by brothers Bernard, Richard, Edward, Francis, and John Kirby. Daniel was born in New Haven December 30, 1926, son of the late Daniel J. and Margaret Mary Gilbride Kirby. Mr. Kirby was the founder and first President of the NHFD Emerald Society. He was a U.S. Army veteran of World War II, and a member of the American Legion, NHFD Post 132. He was also a member of the New Haven Elks Lodge 25. He belonged to the Admiral Foote Camp #17, Sons of Union Veterans of the Civil War. He served as an officer of NHFD Local 825 of the International Association of Firefighters and was honored with the Lt. James Dillon Award for Service to the Union. Mr. Kirby held dual-citizenship in the United States of America and the Republic of Ireland, having proudly received his Irish citizenship on November 7, 2012. He was a member of the New Haven Fr. McKeon Division 7 of the Ancient Order of Hibernians and for many years chairman of Catholic services. He was also a member of the Knights of Saint Patrick, the New Haven Gaelic Football and Hurling Club, and the Connecticut Irish American Historical Society. Mr. Kirby’s enthusiasm for all things Irish never waned. He was a faithful correspondent with his cousins and extended family in Ireland. His several visits to Ireland in the company of his wife Emma left him with treasured memories. In 2001 Mr. Kirby and his wife made a long-desired trip to her ancestral home in Piedimonte Matese, Italy, leaving him deeply moved by the welcome extended him there by relatives and friends. Mr. Kirby was a member of Saint Francis Parish. He served as President of the Holy Name Society, President of the Parish Council, President of the Parish Society, and Extraordinary Minister of Holy Communion. Until obliged to stop driving at the age of 90, Mr. Kirby attended daily Mass, at first in Saint Francis Church and later in Saint Mary’s and Saint Joseph’s Churches. Until he became housebound, Mr. Kirby made a weekly hour of Eucharistic adoration for the sanctification of priests. The family expresses heartfelt thanks to all who cared for him during his final weeks in The Grimes Center, New Haven. A Mass of Requiem will be held at a later date. Sisk Brothers Funeral Home, 3105 Whitney Ave., Hamden has the care of arrangements. Donations can be made to Saint Francis School, 423 Ferry Street, New Haven, CT 06513 or Silverstream Priory (Co. Meath, Ireland) through the Monastery of Our Lady of the Cenacle Foundation, 20315 South Hwy. 75, Mounds, OK 74047. See . To leave an online condolence please visit www.siskbrothers.com

The family of Daniel Bernard Kirby created this Life Tributes page to make it easy to share your memories.

Send flowers to the Kirby family.