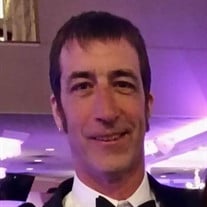 In Woodbridge, June 10, 2016, Dana J. Fox II, 49, of 1990 Litchfield Turnpike, Woodbridge. Father of Erik and Benjamin Shepherd. Partner of Sarah Shepherd. Son of the late Pam Martone and Dana Fox Sr. of NC. Brother of Adam Fox and Adam’s wife, Tracey Fox of North Haven and grandson of Anne Hoff of Florida. A brother, Jaymes Fox, also predeceased him. He is also survived by his cherished nieces and nephews, Adam and Tracey’s children, Anthony, Christian, Kyle, Peyton and Avery and by his stepfather, Carmen Martone, of East Haven. Dana was born in Derby,CT October 10, 1966 and grew up in Bethany. Dana attended TCI after finishing high school and held a variety of jobs in the course of his life. In 2002, he became the operator of Shepherd Farm in Woodbridge. He managed the herd of Jersey cows until 2006. He continued to farm and in March 2015 he started full time work as a landscaper with the Woodbridge Estate Care. Dana loved the outdoors, farming and had many hobbies, among them motorcycle riding. Dana was gifted at figuring out anything mechanical. He was a good friend to many people in the community. Graveside service will be held Thursday morning at 10:30 in Carrington Cemetery, Rainbow Rd., Bethany. Friends may call at Sisk Brothers Funeral Home, 3105 Whitney Ave., Hamden on Wednesday from 4 - 8 pm. In lieu of flowers, memorial contributions in Dana's name may be made to a charity of one's choice.www.siskbrothers.com

The family of Dana J. Fox, II created this Life Tributes page to make it easy to share your memories.