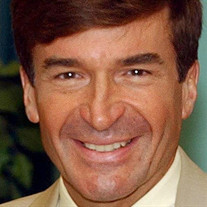 Craig B. Henrici, former mayor of Hamden, passed away peacefully at home with his wife by his side on October 24th after a long and courageous battle with pancreatic cancer. He was 65. He grew up in Hamden and was a National Honor Student and proud graduate of Hamden High School. Craig was a star hockey player and part of the HHS team that won the 1971 State Hockey Championship. He attended Middlebury College and graduated from what is now Quinnipiac Law School. Craig practiced law in both Wallingford and Hamden for over 30 years. Craig served sixteen years on the Town Council and served as Council President for fourteen years. He was a State Representative and served two terms as Mayor of the town he loved. Craig was instrumental in creating the Town Center Park and Hamden’s Farmers Market in the Town Center. He will also be remembered for reforming the town’s pension plan. Craig was responsible for the renovation of the Hamden Town Hall and the construction of the new Police Department. He went on to serve as the Executive Director of the Connecticut Office of Protection and Advocacy for Persons with Disabilities. Craig developed a well-earned reputation for fairness and approachability. He was known for his subtle wit and thoughtful demeanor. He truly understood what it was like to be part of a community. Craig served on the Hamden Chamber of Commerce and was Board Chairman from 2012-2014. He was a life-long and active member of the Mount Carmel Congregational Church. He is survived by his loving and beloved wife of almost 40 years, Lauren (Molloy), and their three cherished children, Luke and his wife Megan-Marie of Ashfield, MA, Jillian and her husband Benjamin Lassel of South Boston, MA, and Timothy of Hamden. Craig is also survived by a brother, Paul, and sister-in-law Carol, of Tucson, AZ, a brother, Ken, and sister-in-law Meryl, of North Haven, and a sister Phyllis, of Los Angeles, CA. His brother Jack and sister Elaine predeceased him, as did his parents, Jack and Elaine. Craig also had many nieces and nephews, and great-nephews, who adored him and mourn his passing. He cherished the Molloy family who will miss him dearly. Craig was loved and will be remembered by his many loyal and longtime friends. The family would like to extend their utmost gratitude for the compassionate and excellent care provided by both Smilow Cancer Hospital and Connecticut Hospice. In lieu of flowers, the family requests donations to assist in the fight against pancreatic cancer. Please make donations to PanCan-Team Henrici at http://support.pancan.org/goto/TeamHenrici Funeral service will be held Monday, Oct. 29th at 11:00 am in the Mt. Carmel Congregational Church, 3284 Whitney Ave., Hamden. Interment will follow in Central Burying Ground (Centerville Cemetery), Hamden. Calling hours at Sisk Brothers Funeral Home, 3105 Whitney Ave., Hamden will be Sunday, Oct. 28th from 2:00 to 6:00 pm. To leave an online memorial visit www.siskbrothers.com. (Photo credit to Hearst Connecticut Media)

Craig B. Henrici, former mayor of Hamden, passed away peacefully at home with his wife by his side on October 24th after a long and courageous battle with pancreatic cancer. He was 65. He grew up in Hamden and was a National Honor Student... View Obituary & Service Information

The family of Craig B. Henrici created this Life Tributes page to make it easy to share your memories.

Craig B. Henrici, former mayor of Hamden, passed away peacefully...

Send flowers to the Henrici family.