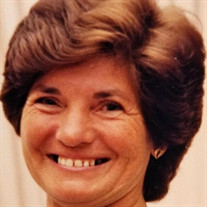 Claire Ita (nee Burke) (Flynn) Cleary—cherished grandmother and great grandmother “Nanny,” beloved mother, treasured mother-in-law, adoring and adored wife—died peacefully, at home, surrounded by family, on June 14, 2020. Claire was born on November 9, 1933, in Killiskea, a townland outside of Tullamore, in County Offaly, Ireland. She was the youngest daughter and last remaining living child born to John and Angela (Brooks) Burke. Her siblings included: John (Alice) of Tullamore, Ireland; Jim (Sheila) of Cavan, Ireland; Paddy (Della) of the Bronx, New York; Joe (Julia) of Cleveland, Ohio; Maureen (Jim) Geoghegan of Hamden; Frances (Pat) Hanlon of New Haven; Angela (Matt) McNeill of Yonkers, New York; Rose (Pat) Clifford of New Haven; Peter (Mary) of New Haven; and Eddie (Judy) of Brewster, New York. She also had more than 50 nieces and nephews. Claire’s childhood was spent on the family farm with her siblings and numerous cousins. Over the course of the 1940s and 50s, most of Claire’s siblings and her parents emigrated to the United States. In 1951, at the age of seventeen, Claire boarded the S.S. America with her sister Angela bound for Ellis Island. In New York, she met Tim Flynn at a dance, ladies’ choice, and they married in 1953. Together they lived on Bainbridge Avenue in the Bronx, and had four children, the third of which was born in a taxi cab! After Tim’s sudden passing in 1961, Claire and the four children moved to Hamden, Connecticut, where she was closer to support from her parents, siblings and extended family. She was very active in the Irish American Community Center (IACC) and volunteered her time supporting Saint Rita’s Church. She also helped many Irish emigrant women acclimate once they had arrived in the New Haven area, finding work and meeting friends. She was an integral part of the IACC’s Camogie team and at one point was the team’s captain. In 1969, Claire married Vincent Cleary, moved to Cheshire where they raised two sons. In Cheshire, Claire was active at the Church of the Epiphany and with the Cheshire Welcome Wagon. In 1988, Vinny’s work took the couple to Florida, where they entertained many visits from their family members over the years. Finally, in 2002 they returned to Connecticut and settled in Meriden. Throughout her life, Claire enjoyed large family gatherings, playing cards, trips to the beach, Irish music, entertaining, dancing, trips to the Catskills and above all she had a ferocious love for her grandchildren and great grandson. She will be most remembered for her hard work, warm heart, great courage and generous spirit. Claire is survived by her loving husband of 51 years, Vinny, and her six children: Claire (Bill) Brayfield of Higganum, Tim Flynn of Miami Beach, Florida, Bernadette Flynn of Roxbury, Virginia, Rita (Chris) Brayfield of Plantsville, Vincent (Marcie) Cleary of Southington and Michael (Charity) Cleary of Southington. She is survived by her grandchildren: Carolyn (Stephen) Ferguson of Milton, Massachusetts; Christine (Robert) Fanciullo of Medford, Massachusetts; Michael (Aja) Creed of Arlington, Virginia; Tim (Tina) Brayfield of Las Vegas, Nevada; Laura (Justin) Brayfield of Glastonbury; Vincent, Caitlin and Sean Cleary of Cheshire; and Teagan, Michael and Isabella Cleary of Southington. She is also survived by her great grandson Philip Ferguson of Milton, Massachusetts. Claire was predeceased by her parents, sisters and brothers and granddaughter Jacqueline Cleary. In the final weeks of her life, Claire was cared for by a loving team of nurses and support aides from Franciscan Home Care and Hospice Care. The family wishes to extend heartfelt gratitude to Sister Faith Marie, Sister Catherine Mary Clarke and Barbara Raby who went above and beyond providing compassionate care. A Mass of Christian Burial will be celebrated Friday at 11 a.m. in Our Lady of Mt. Carmel Church. Prior to the mass, a viewing will take place at 8:30 a.m. at Sisk Brothers Funeral Home, 3105 Whitney Ave., Hamden. A burial at All Saints Cemetery in North Haven will take place at a later date. In lieu of flowers, memorial donations may be sent to Franciscan Home Care and Hospice Care, 267 Finch Avenue, Meriden, CT 06451 or the Irish American Community Center, 9 Venice Place, East Haven, CT 06512. www.siskbrothers.com

The family of Claire I. Cleary created this Life Tributes page to make it easy to share your memories.

Send flowers to the Cleary family.