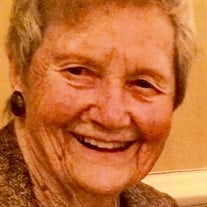 Catherine Theresa Colleran was born on November 10, 1922, a daughter of the late Patrick and Catherine Cunningham Colleran and passed away peacefully at age 99 in her home at Whitney Center on February 23, 2022. She was graduated from St. Francis School, Fair Haven, Hillhouse High School and Albertus Magnus College in 1944. She was employed by Liberty Mutual Insurance Company as a claims adjuster and later opened her own business called Insurance Adjustment Services which she ran for eleven years. She then returned to college and received her Master's degree in Education and Sixth Year Certificate at Southern Connecticut State Teachers College. She became an elementary school teacher in the Hamden School system, and during her tenure she qualified for a one-year sabbatical at the Goethe Institute in Munich, Germany. She continued to teach primarily 6th grade at the Putnam Avenue School and the Westwood School in Hamden. She retired from teaching and returned to Germany, employed by the U.S. Department of Service Clubs (USO) in Germany and during that time she traveled through Germany, Italy, Denmark, England and Ireland. She enjoyed skiing in Europe and Vermont and was a member for many years of the New Haven Ski Club. After her retirement she volunteered for TESL, teaching English as a second language for those new to our country. She was an active parishioner of St. Rita church in Hamden where she sang in the church choir and was a member of Catholic Charities. After living in Spring Glen, Hamden for many years Catherine moved to Whitney Center eight years ago where she became involved in the library and made many new friends. Catherine never stopped learning for she was delightfully curious and aware, taking long walks and enjoying flowers and birds, delighting in sighting the swans returning to Lake Whitney each spring, calling friends to see the full moon. Her joy and smile were infectious and will be missed by her family and friends. Catherine is survived by a brother, John (Wini), and sister-in-law, Margaret Daly Colleran, eleven nieces and nephews and many grand-nieces and nephews. She is predeceased by two brothers, James and Patrick, a sister, Mary Colleran and a sister-in-law Elizabeth Stanton Colleran. "Aunt Catherine" was loved by her nieces and nephews and more recently by their children, her grand nieces and nephews. Her humor and warmth added so much to our many Colleran celebrations and we will miss her and remember her with love. A Mass of Christian Burial will be held at St. Rita Church, 1620 Whitney Avenue, Hamden on Tuesday, March 1, 2022 at 11:00 a.m. Calling hours will be.at Sisk Brothers Funeral Home, 3105 Whitney Avenue, Hamden, Tuesday morning prior to the Mass from 9:30-10:30. Interment will follow at St. Lawrence Cemetery. www.siskbrothers.com

Catherine Theresa Colleran was born on November 10, 1922, a daughter of the late Patrick and Catherine Cunningham Colleran and passed away peacefully at age 99 in her home at Whitney Center on February 23, 2022. She was graduated from St. Francis... View Obituary & Service Information

The family of Catherine T. Colleran created this Life Tributes page to make it easy to share your memories.

Catherine Theresa Colleran was born on November 10, 1922, a daughter...

Send flowers to the Colleran family.