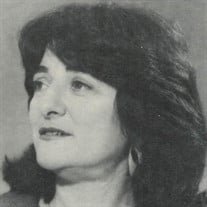 Bianca “Blanche” Lucibelli Porto, daughter of the late Rudolfo E. and Christina Amendola Lucibelli, predeceased by her husband of 59 years, George R. Porto. Born September 3, 1927 in New Haven where she lived for more than 60 years before moving to North Haven in 1995. She graduated from Albertus Magnus College and obtained a Masters Degree from Southern CT State University (SCSU). Following her classroom teaching for the East Haven and Hamden School systems, she became a licensed Speech/Hearing and Language Pathologist, retiring from the Derby Public School system in 1989. For almost 60 years, she enjoyed a rich and successful career as a mezzo soprano in opera, oratorio, chamber ensembles and song recitals. In 1979, she sang her debut recital at Carnegie Hall and appeared as a soloist with the New Haven Symphony Orchestra, CT Symphony Orchestra, Waterbury Symphony Orchestra, CT Opera Association and the late New Haven Opera Co. She was a soloist for many years in area churches including St. Joseph's, St. Mary's, Sacred Heart, United Church and Center Church on the Green. From 1994-2007, she was a singer and board member with the Schola Cantorum of the St. Gregory Society, a choral ensemble dedicated to the performance of Gregorian plainchant and sacred polyphony in the sung Latin Mass. Blanche was a member of The Third Order of St. Dominic, a Dominican lay fraternity dedicated to prayer, study and community life. She traveled extensively to Europe, studied art while there and made several trips to Italy. In July 1989, while on a 22-day pilgrimage to Italy, France, Austria, Germany & Belgium, she wrote "one of the best adventures of my life….peaceful, religious, thoughtful and diversely interesting." She was a political activist in the city of New Haven and a Ward Committee member for many years, participated in the Polarization Conference at Sterling Forest, NY sponsored by The Ford Foundation which involved leaders of the New Haven community. She was an Advisory Board member of the Italian American Community Committee formed at SCSU, a panelist of The Italians in History of New Haven sponsored by The New Haven Historical Society, a member of The New Haven County of Retired Teachers, The Association of Retired Teachers of CT and a life member of The CT Speech Language and Hearing Association. In her retirement, she enjoyed giving private vocal instruction, painting, calligraphy and sewing. Blanche is survived by two sisters, Theresa Lucibelli and Clara Palleria, and five children, Paula (Anthony) Santagata, Monica (Dominic) Contessa, Carla (Randall) Boucher, George D. (Diane Michaud) Porto and Dominica (Tod) Baharian, nine grandchildren, four great-grandchildren and many nieces and nephews. Funeral from Sisk Brothers Funeral Home 3105 Whitney Ave. Hamden Monday at 9:30 a.m., Mass of Christian Burial at 10 a.m. in St. Joseph Church, New Haven. Burial in All Saints Cemetery. Calling hours are Sunday from 3 - 7 p.m. In lieu of flowers contributions to St. Jude's Children's Hospital, 262 Danny Thomas Place, Memphis, TN 38105. To leave an online condolence please visit www.siskbrothers.com

The family of Bianca "Blanche" L. Porto created this Life Tributes page to make it easy to share your memories.

Send flowers to the Porto family.