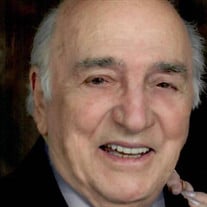 Benjamin A. Rusate, age 94, passed away peacefully on June 23, 2020, in the hearts of his loving family after a brief illness. He was the beloved husband of 68 years to the late Carmella V. Rusate. Benjamin was born in New Haven, CT on May 29th, 1926, to parents the late Alfonso and Maria DiCerbo Rusate. He grew up on Wooster Street in New Haven sharing many fond memories of his childhood. Benjamin graduated from Hillhouse High School in New Haven in 1944. He then enlisted in the U.S. Navy serving his country during World War, II. Benjamin and his family lived in Hamden for over 30 years where he was a member of the Knights of Columbus Lodge for many years before moving to Cheshire for the last 30 years. He worked for Pratt & Whitney in North Haven for 33 years until his retirement in 1988. Benjamin and his late wife, Carmella, loved traveling and took many wonderful vacations, including a trip to the Amalfi Coast in Italy where his family was from. He was also an avid duckpin bowler for over 25 years and a lifelong Giants and Yankees fan. To cherish his memory, he leaves his three children, a son, David B.(Christy)Rusate of Naples, FL, daughters, Denise (Kevin J.) Reynolds of North Haven, and Donna Romano of Cheshire. His beloved grandchildren that brought him much joy, Nina (Tyson) Perry of TX, Brian (Ashley) Rusate of MA, Alex (Katy) Rusate of NY, Angela Romano of MA, Carl Perry of Hamden, Joseph Reynolds of Hamden, Karina (Nick) Lewin of NY and Kaitlyn Kabbash of NY. He was blessed with great-grandchildren whom he adored, Vincent Perry of TX, Leila Perry of TX, Carl Perry, Jr. of Northford, Artie Rusate of MA and James Lewin of NY. Benjamin was predeceased by his sister Raffaela "Dolly" Rusate and his brother Bernardo "Buddy" Rusate. He leaves behind his sisters, Phyllis Merola of Shelton, Rosemarie (Richard) Viscio of Cheshire and Virginia Maiorino of Guilford. He was a true big brother to his sisters whom he loved dearly. He will be missed by his many nieces and nephews and extended family and friends. Family and friends may visit for calling hours on Friday, June 26, at Sisk Brothers Funeral Home, 3105 Whitney Avenue, Hamden, from 9:00 am to 10:30 am directly followed by a Mass of Christian Burial at St. Bridget of Sweden Parish, 175 Main Street, Cheshire, at ll:00 am. Interment will be at All Saints Cemetery, 700 Middletown Ave. North Haven, with full military honors. In lieu of flowers, donations are welcome in honor of Benjamin to the Smilow Cancer Hospital, 35 Park Street, New Haven, Ct. 06511. www.siskbrothers.com

Benjamin A. Rusate, age 94, passed away peacefully on June 23, 2020, in the hearts of his loving family after a brief illness. He was the beloved husband of 68 years to the late Carmella V. Rusate. Benjamin was born in New Haven, CT on May... View Obituary & Service Information

The family of Benjamin A. Rusate created this Life Tributes page to make it easy to share your memories.

Send flowers to the Rusate family.