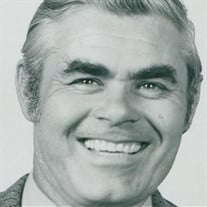 Aloysius Michael Blessing, 88, of Hamden, Connecticut, beloved husband of the late Kathleen Finucane Blessing, passed away peacefully on September 15, 2018 with his family by his side. Aloysius was born on August 9, 1930 in Aughavas, County Leitrim, Ireland to parents Rose Ann Cooney Blessing and Michael Blessing. Aloysius immigrated to the United States in 1955 and worked at Yale University as an electrician for over 30 years. He was a proud and active member of the New Haven Football and Hurling Club where he received the Irishman of the Year award in 1993. He loved Gaelic football and played competitively on several teams in Ireland, England and the United States. His unique skills on the pitch helped his teams win several championships including Aughavas Leitrim Champions 1949 and 1952, Junior Inter-County Connacht Champions 1952, London Gaelic Football Club Champions 1954 and Leitrim New York Champions 1959. In later years, he coached a team of young footballers including his sons on behalf of the New Haven Gaelic Football and Hurling Club. His passions beyond Gaelic football included golf, tending to his garden of tomato plants and enjoying a good chat with family and friends. He also cherished time with his grandchildren. Aloysius is survived by his four children Noel Blessing and his wife Cynthia Banuelos Blessing of New Haven, Olive Blessing of New York City, Patricia Blessing Bell and her husband Jeffrey Bell of Los Angles and Michael Blessing and his wife Rebecca Jenne Blessing of Hamden. Aloysius is also survived by his four grandchildren Fiona, Gabriel, Liam and Dylan. He is survived by his siblings Patsy Blessing McTague, Terry Blessing and Angela Blessing Gray of Dublin, Ireland. Deceased siblings include Claire Blessing O'Connor, Noel Blessing, Michael Blessing, Raymond Blessing and Olive Blessing Gordon. The Blessing family would like to thank the staff of Whitney Manor for the care and compassion bestowed on Aloysius in his final days. In lieu of flowers, donations in Aloysius’s memory may be made to an organization of choice. Friends may visit with his family on Thursday, September 20th from 4:00 pm to 8:00 pm at Sisk Brothers Funeral Home, 3105 Whitney Ave., Hamden and attend a Mass of Christian Burial on Friday, September 21st at 11:00am in St. Rita Church, Hamden. Interment will be private. www.siskbrothers.com

Aloysius Michael Blessing, 88, of Hamden, Connecticut, beloved husband of the late Kathleen Finucane Blessing, passed away peacefully on September 15, 2018 with his family by his side. Aloysius was born on August 9, 1930 in Aughavas, County... View Obituary & Service Information

The family of Aloysius Blessing created this Life Tributes page to make it easy to share your memories.

Send flowers to the Blessing family.