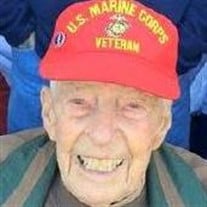 Allen A. Furbush, 91, of North Haven, CT, passed away on September 5, 2016 at his home after a brief illness. Allen was born to the late Frank C. and Helen I. Furbush, August 14, 1925, in Concord, NH. He attended high school at Central High in Manchester, NH where he spent extensive time on both the football field and track. He went on to serve in the 6th Division of the Marine Corps in the Asiatic Pacific from 1944-1946 where he was wounded in action on April 12, 1945 on Okinawa and received a purple heart. Upon return from service with the Marine Corps, Allen continued his education at the University of New Hampshire. He married Anna J. Mahoney, of Manchester, NH on June 19, 1948 and was then hired by the YMCA of New Haven, CT in 1954 and moved his young family to North Haven, CT. He worked as the Physical Director in New Haven, as well as in Bridgeport, until his retirement. He continued to work and volunteer at the Hamden YMCA and Camp after his retirement. In addition to his loving wife, Anna J., who passed away on December 29, 2010, Allen is also predeceased by his brother, Hollis Furbush, who was killed in action on June 15, 1944 at the battle of Saipan while serving in the JASCO division of the Marine Corps. He was awarded a Gold Star Citation and a purple heart. He is survived by his daughters: Margaret Furbush and husband John Hrabushi, Patricia Barlow and Sue DeSorbo, his sons: Frank Furbush and John Furbush and wife Lorraine, and his grandchildren: Justin Barlow and Andrew Furbush. Calling hours are at Sisk Brothers Funeral Home, 3105 Whitney Ave., Hamden CT, on September 14, 2016 from 4-7 PM. Burial will be in Bow, NH. In lieu of flowers, donations can be made to the YMCA Hamden/North Haven, 06514 Sherman Ave. Hamden CT 06514 www.siskbrothers.com To leave an online condolence please vist www.siskbrothers.com

Allen A. Furbush, 91, of North Haven, CT, passed away on September 5, 2016 at his home after a brief illness. Allen was born to the late Frank C. and Helen I. Furbush, August 14, 1925, in Concord, NH. He attended high school at Central High... View Obituary & Service Information

The family of Allen A. Furbush created this Life Tributes page to make it easy to share your memories.

Send flowers to the Furbush family.